I've been away. Not far away. Not even away away. Nevertheless, it has been a trip. I am happy to be back in familiar surroundings.

Had I gone away on a roller coaster, it couldn't have been a more raucous ride. There was renewed grief in the one year anniversary of a personal loss; the joyous homecoming of a much-loved child and her new found love; the wonder of being a tourist in my own city; the melancholy of saying good-bye once again. But most of all, I've been taking a journey with someone I love down Independence Road. The road has not yet come to an end, but the pavement is pitted and broken. Weeds and roots of trees are working their upheaval; it is getting very difficult to maneuver. Can there be anything but a Dead End around the next bend? For now, there is at least dappled sunlight on that road. But I can see the spreading canopy in the not so distant horizon and it threatens to choke out every shaft of light.

To counter such dark effect, I escaped. Lunch at the beach, a walk along the pier, standing on the still parapet of a Civil War fort and trying to imagine life in that place at that time. All were welcome diversions. But if I was forced to name one place where I truly felt everything would work out okay, I would probably say the happy and friendly confines of my kitchen. As much a science laboratory as an art studio, it welcomes me into its Nantucket Gray-ness. I make things there - the sweet and the savory. But there is more to the kitchen than cooking. In the final analysis, we crave not only that which feeds but that which nourishes.

My kitchen is not a wonder of modern technology. The oven is as old as the house and lists gently to the left. If I baked cakes its uneven kilter might matter more. But I don't, so it doesn't. The clock and the timer stopped working long ago; but, I've never really needed a buzzer. A fragrance, an aroma, will usually tell me all I need to know. I am confident in those surroundings. There are no granite countertops. The dishwasher, though fairly new, never worked very well. A month after the warranty ran out, it refused to drain water. A month after being repaired it refused to fill with water. (The man who fixed the dishwasher was a recent Russian emigre and I could not understand anything he said. When I asked him what was wrong with it, I could have sworn he said, "You don't want to know." He probably said something else, but a faint dread kept me from asking for clarification.) I wash dishes by hand and actually enjoy the hot sudsing up while I look out the windows of the breakfast room. I muse that something must be done with the garden, once my pride and joy. I've allowed the weeds and wild grasses to claim dominion for far too long. "When the fall weather is here," I tell myself.

As I said, I am confident in my kitchen. I am confident, for instance, that if I melt three tablespoons of butter and whisk in three tablespoons of flour and cook them gently, and if I then add just the right amount of milk or cream, a bechamel will evolve. With the warmth of freshly grated nutmeg and a sprinkling of Parmesan I have created something very close to perfection. There is an alchemy to cooking. Beef browned in a Dutch oven with carrots and onions, drenched in red wine, and then left to cook slowly will produce a maddeningly succulent dish without any great effort. Magic. Where else in life do our dreams so consistently realize themselves?

This weekend I had five plums... 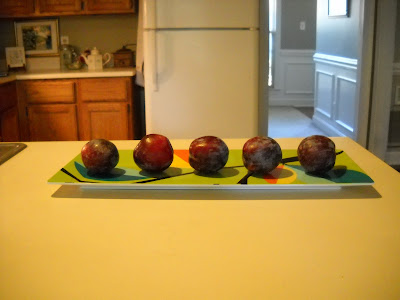 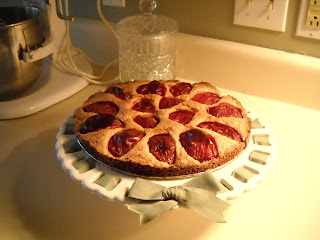 ....with a bit of flour, sugar, butter, baking powder and an egg. 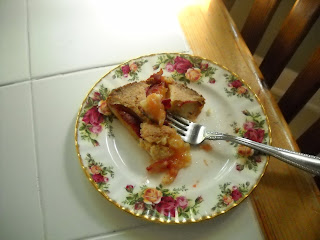 It satisfied more than hunger.
Posted by Grad at 10:03 AM 15 comments: