Hits, Misses, and the Tower of Broken Resolutions

Summer is apparently not conducive for blogging on Planet Grad; but, since it seems a little quiet out in the blogosphere in general I assume everyone has joined me on the beach.  I'm the one in the big yellow hat sitting just past that large clump of sea grass to the right of the wooden swing...the one not wearing a bikini (something for which you may all thank me.)

Although not blogging, I have been chugging along on my personal challenge to read 60 books in the year.  It's a very doable challenge - one book per week plus one audio book for the commute to and from work each month.  I am actually a little ahead of schedule and had hopes of exceeding the 60, but I'm not too confident that will happen.  You see, things roll along seamlessly for a while, and then I hit the skids with a bit of a clunker - or a non-clunker that becomes a bit of a slog because it is dense and difficult but too worthwhile to abandon.

Two of the surprising "hits" have been novels by Jeanne Ray, an author I had not heard of before Litlove, of Tales From The Reading Room blogging fame, wrote a post reviewing Julie And Romeo.  It was such a delightful, happy read that I borrowed Eat Cake from the library and enjoyed it even more.  And then of course there were the usual suspects:  Agatha Christie, Alan Bradley's Flavia de Luce series, and a re-read of To Kill A Mockingbird.  All good stuff - straightforward, well-written and enjoyable stuff.  And, except for Mockingbird, pretty easy on the brain.

That cannot be said for two of the shortest novels I've read this year.  Hotel du Lac by Anita Brookner, covers about 185 pages in which very little happens other than taking tea and going for walks and having conversations with strangers. Nevertheless, it was one of the best things I've read lately although it took me an inordinate amount of time to finish it.  If I had to describe it in one word it might be subtly compelling - which proves I need at least two words to give it proper credit.

The other even shorter novel (a mere 119 pages) took even longer to read.  In Equal Danger, by Leonardo Sciascia, someone is methodically killing officials of an imaginary country (which resembles Sicily, by the way) and Inspector Rogas is assigned the task of solving the case - but it just isn't that easy.  It never is.  What a strange little book.  Is it a thriller, a murder mystery, a political commentary, a metaphysical character study?  I never was able to categorize it, but it sure was poetry in prose.  I  took me nearly a week to read - a mere 20 pages a day was all I could muster and it made my head hurt, but in a good way.

Pulling Taffy, by Tinky Weisblat is lovely little gem of a memoir.  It covers one year in the life of a mother who is living with Alzheimer's, and her daughter who is determined that "living" remains the operative word.  Make no mistake, these are no ordinary mother and daughter.  Jan Weisblat lived an accomplished, interesting and full life most of us would envy.  It ended with grace and dignity.   If you need something funny, poignant, sometimes sad, but always uplifting, this is the ticket.

There have only been a few "misses," but when they were bad I found them awful.  She's Come Undone, by Wally Lamb was not simply a bore, it was populated by characters I found obnoxious and self-absorbed.  Unsympathetic characters are very often the death knell for a book and, thinking back, I can't remember one I liked.  The whole thing fell with a dull thud.

Let me begin by stating:  I love Neil Gaiman.  The Graveyard Book is one of my all-time favorites as is The Anansi Boys so it really pains me to say that American Gods was a big, fat loser for me.  In the "book world" this will sound like heresy, I know, but hear me out.  Look...I don't use profanity very much myself, but it doesn't particularly offend me and by the time one reaches my age almost all of it has lost its shock value anyway.  I get that some of the characters are very rough around the edges and it would seem that their vocabularies should follow suit. Ditto the sexual situations - although very graphic and in many cases unnecessary to the plot, no big shockeroo there either.  Here's what I found tedious about the book.  I equate it to being at a cocktail party populated with colorful and exotic characters...interesting characters I'd like to talk to.  But for some reason, the weird drunk gloms onto me and drones on and on about some topic upon which he believes himself to be an expert.  The drunk thinks he is erudite and fascinating.  In the meantime, I'm looking around the room, the condensation from my drink pooling in my fingers, trying to catch the eye of someone sane who will come and rescue me by taking me by the elbow and leading me over to the chips and dip table.  Alas, salvation never comes.  After that crazy drunk wanders off, another takes his place.  One after the other, all night, until I've had enough and all I want to do is go home where it's quiet.  That is my review of American Gods.  But my disappointment is not enough for me to swear off Gaiman and his newest is right there in my Tower of Broken Resolutions.

Which leads me to this: 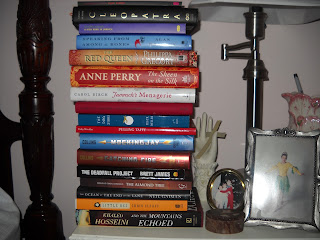 I only made one New Years Resolution:  I was to read only from books I already had on my shelves.  At the time I not only meant it, I thought I could do it...cold turkey...without a twelve-step program.  The above stack represents my falling off the No-More-Buying-Books wagon and does not include books I purchased at the library's Big Book Sale in March (which I think numbered 17) nor does it include additions to my cookbook collection.  Additionally, there have been loans from the library.  In my defense, two of the above books were review copies I received directly from the authors (The Almond Tree and The Deadfall Project) and two are gifts (Catching Fire and Mockingjay)  At this point, once these books get put back onto the shelves, I will have officially run out of bookshelf space.  Normal folks would simply refrain from any further purchases, or resort to giving some titles away.  Book-folk think more creatively and a little less pragmatically.  They decide where to build more shelving and calculate the cost later. 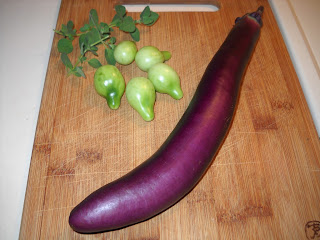 There is one more photo I must share with you.  Behold my $185 Japanese eggplant!   After purchasing the containers, soil, mushroom compost, watering can, and plants at the aforementioned cost, I have harvested that-there eggplant and those little yellow pear tomatoes, which are not yet ripe but which have been hanging on for dear life for 3 weeks without any intention of ever becoming ripe. The green sprig is oregano, which is prolific.  I was complaining to my brother about the sparse harvest and the fact I could have had a truck-load of eggplant delivered to my front door for the cost of that one lovely specimen, when, with the wisdom and sunny outlook on life that all true gardeners seem to possess, he sighed and explained, "But, that's not the point, Linderino."   Looking at my Tower of Broken Resolutions, I think I know what he meant.