Newsweek will cease to produce a printed copy of the magazine in a couple of months.  Although it has changed radically over the years, I remember when it was a serious and (at least seemingly) non-biased reporter of the news.  But it was much more than that.  It was a snapshot of our lives.  I was an early, and probably precocious, subscriber as a teenager in the 1960s.  Happily, a few of the magazines survived by hiding at the bottom of a trunk, stowaways on my travels from this place to that. 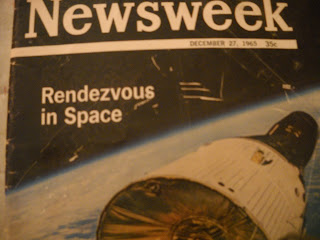 This issue is from December 27, 1965.  President Kennedy had been assassinated 2 years earlier, but space exploration, a legacy of his Presidency, was still alive.  Sadly, things have changed and we have apparently abandoned our great dreams of exploring space.  But in 1965 the first space rendezvous between Gemini 6, commanded by Wally Shira,  and Gemini 7, with a crew of Frank Borman and James Lovell, had successfully been accomplished.  "We did it!!" was the exclamation.  At that time it was the longest manned flight, 330 hours 35 minutes and the first formation flight in space. 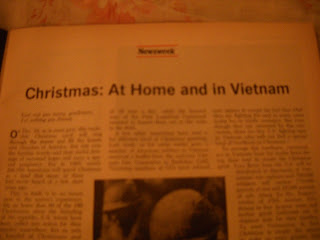 We were still fighting in Vietnam, and the issue covered how families at home were coping with Christmas.  They spotlighted individual service men:  The Adviser, The Staff Sergeant, The Jet Pilot, The Marine Gunner, The Medic, and The Infantry Colonel and how they were celebrating Christmas in the fields of battle, mirrored by the brave efforts of the people who loved them to keep some semblance of normalcy in an abnormal world...determined to save Christmas. 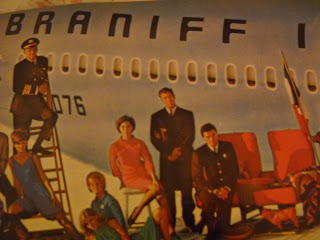 Airlines were still glamorous.  Braniff International (if anyone still remembers it) announced "the End of the Plain Plane" with cuisine by Alexander Girard of La Fonda Del Sol in New York, and "hostess" and pilot uniforms designed by Pucci. 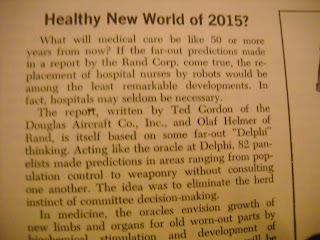 When it came to speculation about the future of our health in 2015, there were predictions that nurses would be replaced by robots in hospitals.  That "would be among the least remarkable development" by 2015.  A dicey prediction, obviously.  However, the science of robotics in general has made great strides in the past 50 years.  Additionally the oracle predicted life span would likely be extended beyond 100 years, molecular genetic engineering would insure that babies are born to stay healthy, and we would be able to grow new limbs and organs - presumably in the laboratory, although the article doesn't specify.   However, the report sets forth a probability that might cancel out all these benefits:  the outbreak of a major war before 2000.   Considering humankind, that was an unhappy but not unpredictable prediction. 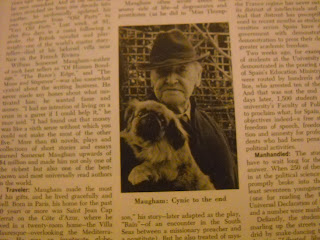 Somerset Maugham had died the week before the publication of this issue of Newsweek, and the magazine did a splendid article about his life.  "When my obituary at last appears in The Times, and they say, 'What?  I thought he died years ago!' my ghost will gently chuckle."  Maugham lived gracefully and well, it went on to state.  "I had no intention of living on a crust in a garret if I could help it," he once said.  Maugham admitted to being something of a misogynist, and many of his distaff characters did come in for rough treatment.  He was a gentle man at heart, but apparently remained convinced that life was essentially meaningless.  That view is certainly reflected in the works with which I am familiar, but this article convinced me to adore him nevertheless. 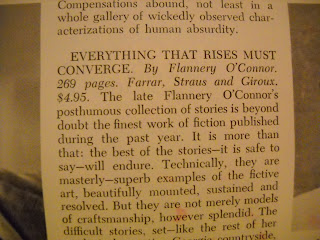 There was a glowing review of Flannery O'Connor's posthumous collection of short stories, Everything That Rises Must Converge (named after one of the short stories in the collection).  I believe this article may have been my first introduction to O'Connor.  I know we did not study her work in high school.  Unbeknownst to me in 1965, I would one day make my home in the city of her birth, a city where she is revered and loved.   I re-read this beautiful, compelling, dark, and disturbing short story this summer.  Powerful story, powerful woman, powerful writer, powerful review.  What more is there to say? 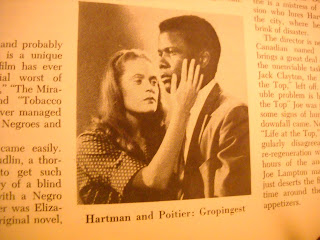 A Patch Of Blue starring Sydney Poitier and Elizabeth Hartman was panned, for good reason if I remember correctly...and of course... 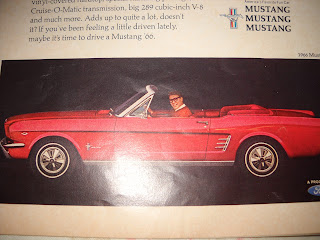 ...it would not be 1965 without a red Mustang convertible.

Henry Charles Dickens, 87 years old and the last surviving grandchild of Charles Dickens, and his wife Fanny hosted a Christmas feast for 16 members of the family; Frank Sinatra, as he turned 50, announced he expected to "swing for 50 more,"  (I wish it had been 100 more, Ol' Blue Eyes), Brigitte Bardot, in her usual brilliance, declared she wanted "to be myself.  Lady Bird Johnson prepared to entertain Prime Minister Harold Wilson even as White House chef Rene Verdon gave notice he would be leaving his post.  Hired to please the Continental palate of Jacqueline Kennedy, the French-born chef found LBJ's penchant for barbecue, spoon bread and fried chicken just...well...shall we say, too much to swallow.

I haven't subscribed to Newsweek for decades.  But I feel a certain affection for it...for what it used to be.  I can't help but feel a bit sad.  Like when you know the goodbye is final.  Like the day you graduate from college and pack up your dorm room, a dull ache starting in your chest and making a lump in your throat.  Like driving away away for the last time...into your life and whatever it holds.