To Everything There Is A Season; And A Time For Every Purpose 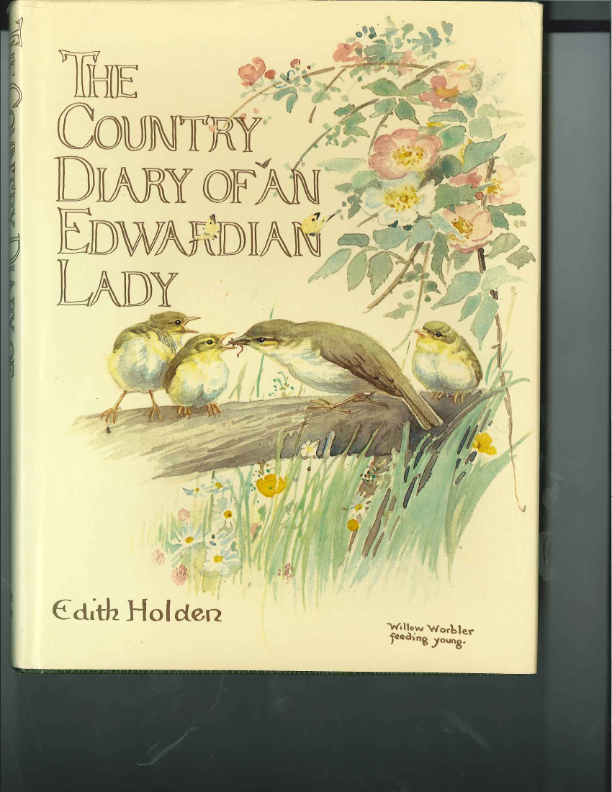 A few years ago my sister found a lovely full-color facsimile edition of The Country Diary Of An Edwardian Lady, a nature diary kept in 1906 by illustrator/naturalist Edith Holden who lived in the village of Olton, Warwickshire, England.

Holden began her journal on January 1, 1906 and continued to capture the change of seasons through the use of her keen eye, careful hand, and beautiful artwork.   Not exclusively a diary, as the year progressed she also included a few of her favorite poems (Byron, Burns, Wordsworth, E. B. Browning) and her personal observations of the world around her.  Edith Holden worked as an illustrator following art school and her work has been published in several books, but rumor has it that she never allowed anyone to look at this diary.  And apparently no one did until nearly 70 years after her death when it was discovered on a bookshelf in a country house. I can imagine what a spectacular find that would have been for any book lover!

In 1911 Edith married a sculptor, Ernest Smith and moved to Chelsea.  They had no children.

On March 16, 1920, while she was attempting to gather the buds from chestnut trees, she drowned in the Thames.  She was only 49 years old. 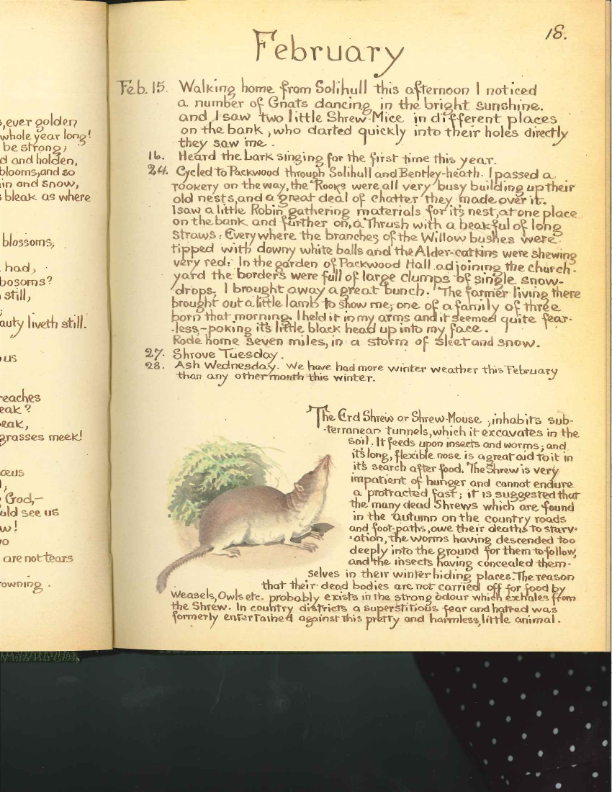 After my sister gave me this lovely diary, I learned that it was a popular coffee table book when first published.  But it is also an inspiration for would-be diarists, journal keepers, bird watchers, naturalists, and just plain folks who like to get outside and observe nature - perhaps even an encouragement to make a record of one's own. 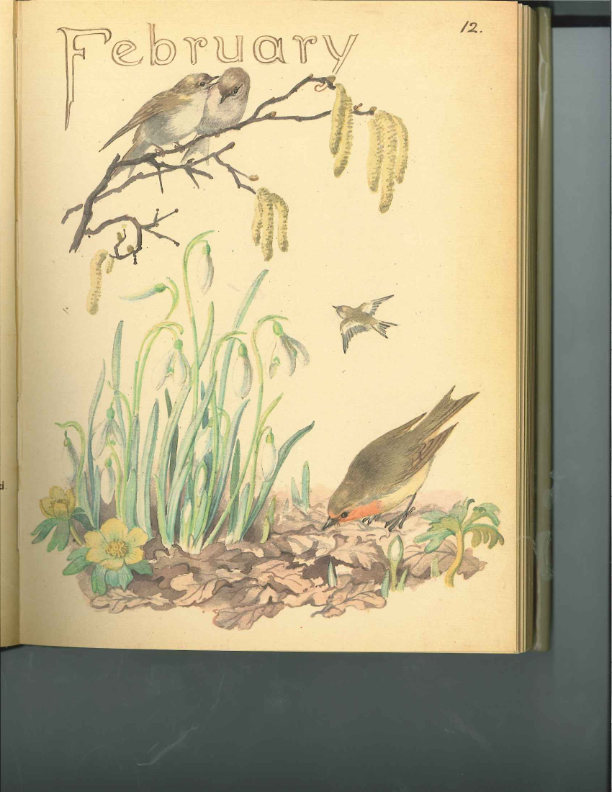 Certainly, few of us have the artistic talent of an Edith Holden, but even without the illustrations, it is delightful to know that on December 27, 1906, "in the paper today it reports that all Britain lies under snow from John O'Groats to Land's End for the first time for six years." Or that on the 30th "[t]he blackbirds and thrushes are usually rather shy, and fly away at the approach of any-one but now they only hop away to a little distance and sit watching with their bright eyes from beneath the friendly shelter of a bush, waiting to go back to their feast of crumbs." 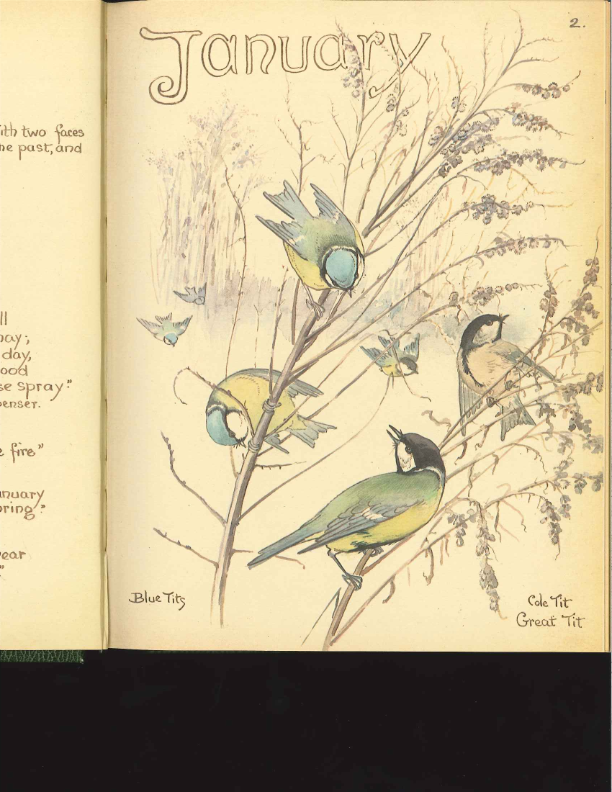 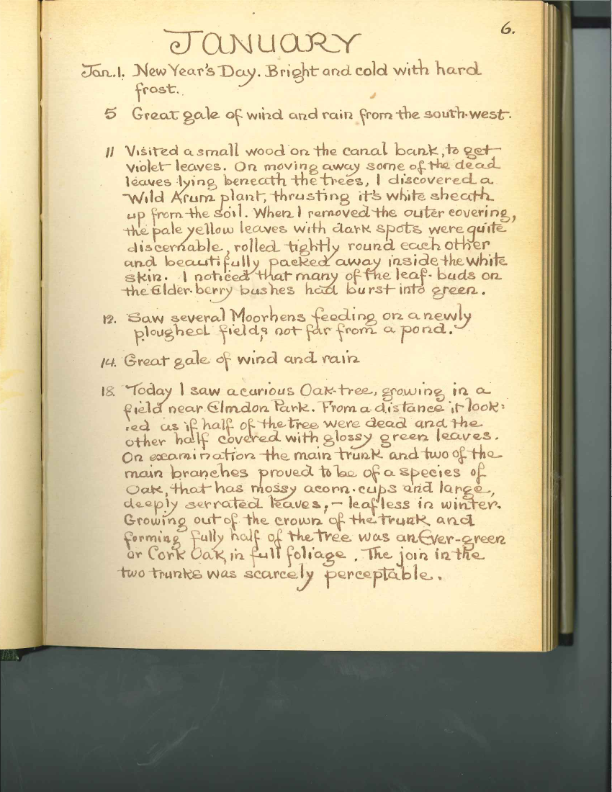 But the promise of Spring is the promise of Spring.  It was so back then, and so it is now.  In 1906, on what would decades later be my birthday, Edith Holden went to Stratford on Avon and "walked to Shottery across the meadows.  On the way I gathered Hawthorn blossom from the hedges and saw fields yellow with Buttercups and banks of blue Speedwell.  The Dandelions were a wonderful sight along the railway cutting."

I would like to have known her and through her diary I almost feel I do.  As it is, I'm not much of a painter, but this might be the year I invest in some brushes and a box of watercolors.  It's never too late to learn, and if this diary proves anything it proves that to everything there is a season.  Edith would approve. 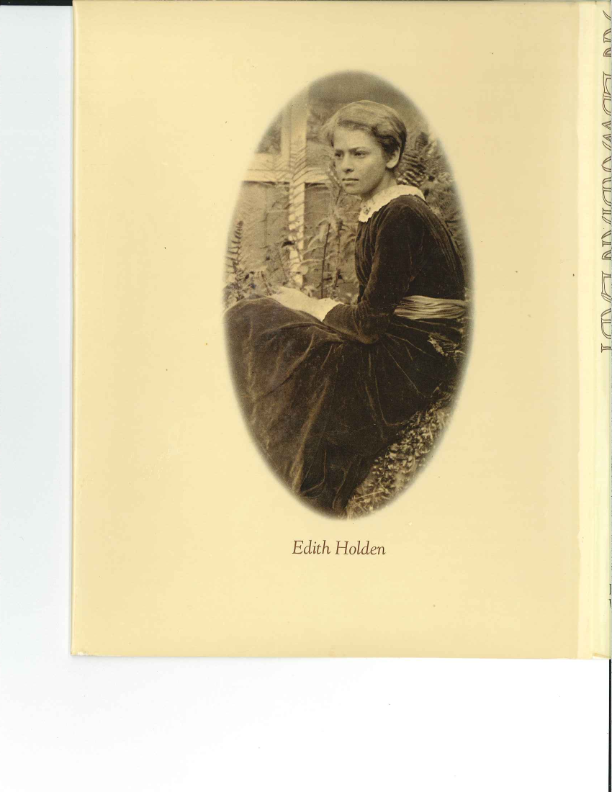