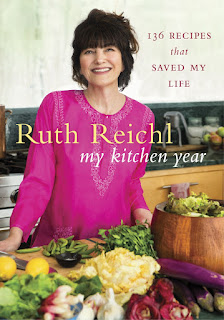 Ms. Reichl is a fine writer, there is no taking that away from her.  There are some very workable recipes in the book; delicious even.  And, to be fair, after a full year of soul-searching, ingredient shopping, party giving, romantic evenings with her husband, and long walks in the woods, she comes to the revelation that her life is pretty damn good after all.  Something that many of us already knew.  One wonders why it took her so long.
Posted by Grad at 5:35 PM 17 comments: