The Randomness of Baking Bread 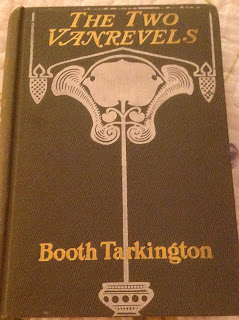 I can’t remember the last time I bought bread – the sliced, sandwich type bread.  Yes, there is the occasional loaf of warm boule from the bakery to be savored, thickly spread with a soft brie.  I’ve been known to go out of my way for an authentic French baguette which I never seem to achieve at home, the crunchy crust that shatters into spiky shards, the rough textured and raggedy interior.  It is the bread that will never be produced from my oven, a fossilized remnant of the 1980s.  But for the daily loaf it works just fine.  And so I bake.

Baking bread is the essence of a lazy weekend.  Bread cannot be rushed and in the early stages of its development should not be jostled.  The very term “resting,” which yeast breads normally require, quiets the mind, soothes the soul and calms the spirit.  On a dark, rainy Sunday morning there are few places I’d rather be than in the warm kitchen, gently kneading bread dough.  The entire scene makes me happy:  the big ceramic mixing bowl, the sturdy wooden spoon, a clean linen cloth, big jars of flour, the magic of watching yeast bubble into life.  And then, of course, there is the fragrance.

When bread machines first hit the market over a decade ago, I had to have one.  In a pinch it works just fine.  Baking With Juila – based on the Julia Child TV series - has a particularly good Buttermilk Bread Machine Bread recipe.  Being book crazed, I am often on the trail of books about bread.  And because there is a randomness to life itself, one thing will invariably lead to another, and then to something else – down a road you didn’t know you wanted to travel to find something you didn’t know you desired.

So, back to Baking With Julia.  If you know anything about Julia Child, you have probably heard of Judith Jones.  She was the editor at Albert A. Knopf who championed the publication of Mastering The Art of French Cooking.  She is also credited with saving The Diary of Anne Frank from oblivion when she worked at Doubleday.  My own personal library contains cookbooks she has brought to life, including those by Lidia Bastianich, Joan Nathan, Jacques Pepin, James Beard, and Marcella Hazan.  Obviously, Judith Jones knows her stuff. I knew she was a fine editor and was not a bit surprised to learn she was also a fine cook.  In the 1980s she and her husband, Evan Jones, wrote The Book of Bread now sadly out of print.  It was put on my mental wish list.

Rummaging around in a used book store is always fun for a book nerd, but it is especially so when the nerd goes equipped with a mental wish list.  We have a wonderful, dusty, crammed to the rafters, tight-aisled, rambling, creaky, saggy sofa-ed, dog-sleeping-inside-the-front-door-so-you-have-to-step-over-her, used book store a short walk from my office.  The narrow entrance is reached by going down several brick stairs, which were obviously laid long before a building code existed.  When the door is opened there is the ubiquitous tinkling bell which probably should seem clichéd - but does not - and tiny “tea room” the size of an average walk-in closet.  In other words, heaven.

And so I stood one afternoon in the alcove of that shop where the cookbooks are stacked, unsure of the thing for which I was searching, but certain I would know it when I found it.  And there it was.  The Book of Bread by Judith and Evan Jones.  Without a doubt the trip was a huge success;  I made my way to the desk at the front of the store.  As I did I passed an aisle that contained what appeared to be very old volumes.  I made a small detour.  I ran my hand along the spines and stopped at The Two Vanrevels by Booth Tarkington.  On the flyleaf was an inscription “To Emma from Acca and Tommie – Merry Christmas 1902” 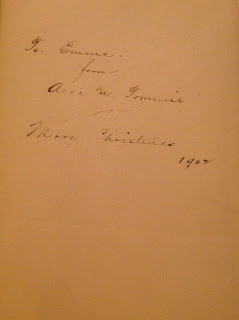 I was immediately smitten and my imagination raced.  How old was Emma in 1902?  Was it a happy Christmas?  Did she treasure this gift?  Where did her journey take her?  Where and when did her journey end?  Did this book travel with her?  Reluctantly, fighting self-indulgence with great practicality, I put the book back on the shelf.  It was not on my mental wish list.  There was no room for impulsive acquisitions.  It was proof of my will-power.  I walked away and out of the shop.

Very soon it set in...Agony.  I thought about that book for days.  At first regret whispered and then it shouted.  Deep within I knew I had made a mistake.  I went back to the book store several days later, straight to that aisle and to that shelf.  It was gone.  Gone!  I failed to follow my instincts and now it was gone.  I mentally kicked myself in the fullest part of my anatomy.  I think I may have croaked out a noise – a cross between groan and a loud shriek - which seemed to upset the dog.  I turned to leave.

It was then that I saw it.  On the wrong shelf, yes.  Displaced, without doubt.  But it was really and truly there and I was meant to find it.

It was mine.  After doing a bit of research I learned that my volume was not simply a first edition, it was the first printing of the first edition.  A printing error on page 127 slipped by the editor, apparently (something which Judith Jones would never have allowed - see if you can find it) and was subsequently corrected in the “second” first edition.  I won’t take credit for knowing I was purchasing a fairly rare book, because I did not.  I bought it because I fell in love with it, with the sentiment attached to it.  I treasure it for that reason. 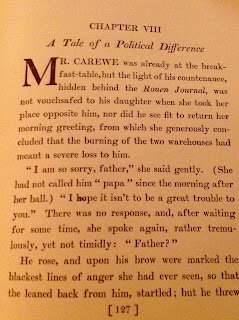 Do you see how random it is?  All of it?  One can make plans and draw graphs and fill out action lists to the heart’s delight.  But in the end, the big and the small things that comprise a life are largely forged by the unforeseen, the turns in the road we did not envision, the traffic jam that causes one to miss a plane, the change leaving 5 minutes later than planned can make in the course of the whole wide, all encompassing experience.