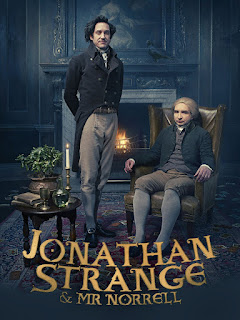 About ten years ago I belonged to one of those big "book clubs." You know the ones. They send you a brochure every month. You can choose the selection for that month, or order something else from the catalog by sending in the little card that accompanies the brochure.  If you don't send in the little card advising you do NOT want the selection of the month, it is automatically sent to you (and charged to your credit card.)  It is a very successful marketing model since it taps into the fact that so many of us are (a) procrastinators, (b) forgetful, or (c) so disorganized we will lose the little card and never find it before the deadline runs out.  That is how I originally came to own the hardbound version of Jonathan Strange & Mr. Norrell by Susanna Clarke.  I had never heard of it, wasn’t interested in it, and lifted it up to a bookshelf where its substantial girth took up considerable real estate.  I looked upon it as another unnecessary financial outlay and resolved to mend my disorganized, forgetful and procrastinating ways.  But then my eldest child came to visit.

He was an early reader, having taught himself (apparently, because I didn’t teach him) at the age of 3.  I used to joke I bought him books by the pound rather than by storyline.  The bigger and heftier the book, the happier my boy.  He saw Jonathan Strange on the shelf, had heard the buzz, and with my blessing took it with him when he left.  I never thought of it again.  Fast forward 9 years.

There are times when I am absolutely driven to find and read a book.  I usually can’t remember what triggers the obsession.  In the case of Jonathan Strange I may have heard that BBC America was about to unleash a TV series based upon it.  But I’m a little vague on that as well.  In any event, I placed myself in the library queue.  I was first in line and I could have waited.  But when it wasn’t ready by the second day I simply couldn’t stand the suspense any longer.  I ordered the paperback version from Barnes & Noble, which promised to have it delivered within 3 business days – free shipping.  When a book weighs in at over 1000 pages, free shipping clinches the deal to my way of thinking.

I’ve been dragging this doorstop of a book around with me for 11 days.  To the car wash, to the car dealership, to the hair salon, to the bank, to the office.  Wherever and whenever I think I’ll have the slightest minute of downtime.  I’ve left it (reluctantly) behind when I know it would be inexcusably rude to pull it out to read (like at lunch with a friend), or just plain wrong (like church).  But I have to admit, it’s painful.

I’ve been trying to take it slow; that’s not easy.  It is so completely absorbing I really have to force myself to put it down and step away from it.  I am a little over half-way finished and I’m already feeling a little panicked.  At this rate, it will all be over in another week.  And then what shall I read?  “Will anything ever be this good again?” I ask myself.  When I've read the last page and closed the back cover, I expect it will take a long time to find another book that I can live in.  Oh yes,yes, I know.  I hear you thinking, “Isn’t she being a bit dramatic.”  No.  I am not.  In fact, I will go further.  There are words that have been invented to describe a book like this.  They include “magnificent,” “inventive,” “unique,” “mesmerizing,” intelligent,” “eloquent,” “enchanting,” “meticulous.”  Dear me.  I am slobbering, aren’t I.

I’ve been having a lot less luck with the TV series.  It airs on Saturday at 10:00 p.m.  I am an early riser who finds it difficult to stay up past 9:00 p.m.  A hopeless wimp to whom New Year’s Eve is the day when people call me at midnight, waking me from peaceful slumber wishing me to be happy and creating the opposite effect.  I made it through about 15 minutes of Episode 1, was completely zonked out before Episode 2 even started, but am determined to put up a fight when Episode 3 rolls around tomorrow.  Hot coffee, sharp objects, an ice bath.  Figuring out whether I get “BBC America On Demand” is another option.  Although the remote scares me.  Or there is always the option of ordering the first season on DVD when made available

How is it that a book of this length seems too short?  The fact that the writing style remains consistent and sharp throughout is in itself a marvel, but it is the imaginative building of the story line –episode by episode - that is truly remarkable.  The novel is peppered with footnotes – some several pages long – which one would think would be terribly distracting when, in fact, they add immeasurably to the back story.  One can say it is a literary alchemy of sorts which, since the book is about magic, is just as it should be.

I must remember to ask my son if he ever read the book.  The one I wish I’d have hidden under the sofa rather than leave it exposed on the bookshelf to be purloined by a book usurper.  The one I should have grabbed back while growling, “Get your own copy.”  After all, there are limits to the sacrifices a mother must or should make for her children.

This, my friends, is the book I wish I could have written and I can’t give it higher praise that that.
Posted by Grad at 4:02 PM 14 comments:

I will be the first to admit that when it comes to television I tend to live under a rock.  But books…now that’s another story altogether.  So where have I been since 1945 when Winston Graham penned Ross Poldark:  A Novel of Cornwall, 1783-1787?  Not yet born for some of those years, granted.  But what is my excuse for the decades that followed?  And even though I have never been a big fan of TV, the exception has always been the fabulous offerings of PBS, especially via BBC productions.  I learned that the books had been produced for television back in the 1970s, like Upstairs Downstairs.  It was a big hit.  And yet…crickets chirping.

So when I heard, in a very casual way, that there was a new series coming to PBS in a few weeks called Poldark based on a series of books that have been around for quite some time, I did a little internet surfing.  What I read did not particularly grab me:  Ross Poldark, a British Army officer returns to Cornwall after having fought for the Crown in the Revolutionary War only to find his fiancé betrothed to his cousin and his family estate in ruins.  “Oh.  A romance novel,” I yawned deflated.  Not exactly my cup of gin.  Like a cherry on the top, the cover of the newly released book was even less appealing.  I would not have been surprised to find Fabio on the cover.  But I have great faith in the BBC and PBS.  “So, where’s the trust?” I asked myself.  The old adage is true:  one really can’t judge a book by its cover.  Or its blurbs.

I found a site that offered a sampling.  I just love samples, don’t you?  Yes, I do find them hard to pass up.  Be it cheese cubes, tortilla chips, warm pralines, shrimp on a toothpick, it doesn’t seem to matter.  Thinking “just a nibble,” I began with the prologue (yum) and read through the first chapter of the first volume (of which there are apparently 12).  It was over all too soon.  And as is the purpose of all good samples, when the “taste” was over I wanted more.  I was hooked and thrown into the boat.

My plan was to run over to my favorite bookstore at lunch and grab a copy today. (oh joy)  But a quick phone call confirmed they did not have it in stock.  (oh groan)  But since the order for today had not gone out (I called as soon as they opened), I could possibly have it in my mitts by Friday. (oh joy).  Having thus assuaged my “bookie” conscience by buying from my independent bookstore first (because if they disappear I'll blame myself), I ordered the second volume, Demelza:  A Novel of Cornwall 1788-1790 from Barnes & Noble, which I should receive by Monday at a fairly nice savings and free shipping.

If all goes as planned, when the series starts on Sunday, June 21, I’ll have consumed both volumes and be fully satiated, smugly able to sit back and judge the quality of the production, and fully anticipating the banquet of 10 more volumes to go!!  I’ll try not to burp.
Posted by Grad at 1:17 PM 15 comments: