...And The Cow Jumped Over The Moon 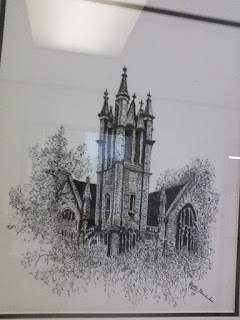 The room was quiet and bathed in mid-morning light.  I had been reading for an hour but it was time to accomplish the work of the day.  I closed my book and looked over to where my mother sat at her usual place on the couch, wrapped as always in a blanket for she is perpetually cold – or so she says.   Her eyes were closed; she was asleep.  I noticed her hands resting on her chest.  I began to cry.   I began to cry because something hit me sharp and hard.  It hurt.  To those hands, which were always so strong and yet so gentle, I owe so much.   Those were the cool hands I felt on my hot brow when I was sick; they were the ones that sewed my favorite childhood dress.  She let me pick the fabric and I chose a soft white cotton with small cartoon-like drawings of people on it:  ladies in stylish hats and carrying purses over their arms, little children running with hoops, men in bowlers.  I called it “my people dress” and except for my wedding gown I can’t remember being more enamored with a piece of clothing than I was with that one.

My mother took me shopping with her quite a bit.  She didn’t drive back then and so we always walked.  As we walked, instead of holding hands we would clap each other’s hand.  Walk, clap, walk, clap, walk, clap.  It was a silly game and so inconsequential that I should probably not be able to remember it. But the longer I live the more I realize things which seem of no particular consequence at the time dimple our memories with the deepest impressions.   On these excursions, we would usually pass a little bookshop on Cermak Road.   I haven’t been back to the old neighborhood in many decades, but it has probably been replaced with a fast food joint or 7-11 convenience store and is nothing more than an old ghost now.  One day as we passed the shop, I saw a new Nancy Drew book in the window.  It cost $1.00.  I begged; my mother hesitated.  I loved books even then and she always acted as co-conspirator and egger-on, feeding my habit.   But a dollar carried more heft in the late 1950s when a first class stamp was 4 cents and a gallon of milk or a trip to the movies cost a quarter each.   She looked at me and at the window and at me.  I carried home my treasure.

At Christmas, weddings and funerals we always had Potica.  It is THE dish of Slovenia and no occasion of joy or mourning could be complete without it.  She would make the yeasty dough and roll it out as thinly as she could without tearing.  Although there are variations, Mom’s filling would always be the same – and of course I believe the best.  It consisted of ground walnuts, honey, meringue, and a little cinnamon.  I watched as her hands manipulated the dough, and spread the walnut concoction, and coxed the whole thing into a roll to be placed in a tube pan.  When it came out of the oven, we could at last declare it to be Christmas.  My mother was a wonderful cook, but she wasn’t a particularly organized one.  She was decidedly unappreciative of company in the kitchen during the preparation of a big meal.   If one was able to sneak a gander at what was going on in there, the sight would alarm all but the stout of heart.  Pots, dripping spoons, potato peelings, more pots with covers belching steam, splashes of tomato or of gravy, cookbooks strewn hither, scraps of paper that held instructions for the making of some exotic morsel taped to a cabinet,  yet more pots with covers askew to overflowing, and lots of boiling, bubbling, gurgling chaos.  What emerged, however, was nothing short of fabulous – and with candles for the table.  It was only at the end of the perfect meal, when we children were assigned the task of flotsam and jetsam removal, that the madness which preceded genius was revealed.

Another of my mother’s specialties was something she called “Orange Blossom Punch” and was made with two types of citrus sherbet, orange juice concentrate, and 7-Up – with maraschino cherries tossed in “for color.”  She always served it after midnight Mass on Christmas Eve (with potica) and she always put the punch bowl on the piano.  I don’t know if it was out of a superstition of some sort (both of my parents were blessed with an abundance of them) but the piano it always was and always had to be.  Growing up, I remember so many holidays that my mother made special with the work of her hands.  One particular Halloween I came home from school, eager to get dressed up as a bum, and found the dining room table filled with wondrous things.  While we were at school she must have spent the entire day getting ready for the moment.  She had hollowed out oranges, cut smiling Jack-O-Lantern faces in the shells, and filled them with jello.  There were also Hoot-Owl cookies she constructed using part chocolate and part vanilla dough which she shaped into owl heads, a cashew for the beak.  They were little works of art.  But of, course, my mother was an artist.

If you look around my house or walk into my office you will see the splendid examples of art wrought by my mother’s hands.  She is – or was – very gifted.  Although watercolor was her medium of choice, she did splendid work in pen & ink and chalk.  But she also built things, like the riding toy made from plywood with a base that rocked.  On the sides she painted a crescent moon onto the rounded base, and  higher up a cow in full jump in a sky full of stars – with the words “…and the cow jumped over the moon.”  This she made for my son, John.  She made it quietly, with no fanfare.  I can imagine her plotting it out, standing back as she painted, judging her work, striving to get it just right.  She painted it gently and brightly with an awesomeness only she could manage.

My mother has entered her 96th year.  She is often confused about the day – not just the date, but whether it is morning or night, whether one puts milk or water in the coffee maker, which of those doors upstairs leads to her bedroom.   She wonders when her son is bringing back her dog, the one he borrowed for the weekend, the one that in fact has been gone for many years.   When her sister died last year at the age of 98, I decided there was no point in telling her.  I want her to be happy.  The past can be a nice comfortable place to be.   I just finished a wonderful book entitled The Go-Between by L. P. Hartley, the first line of which is “The past is a foreign country:  they do things differently there.”  Yes, they do.  That is where my mother calms a fevered brow, bakes surprises for her children, works a band saw, paints a bowl of peonies or a crane in the marsh looking for a fish.  That is where she captures the steeple of a church rising high above the tree tops reaching toward heaven -  reaching into forever.  And where, suspended in the dark blue firmament, a cow jumps over a silvery crescent moon, chasing stars.
Posted by Grad at 1:18 PM 21 comments: