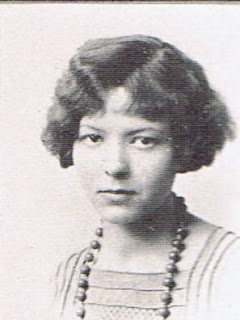 It was the evening of June 12, 1924. The weather was unsettled and cooler than usual for that time of year. Lightening buzzed and crackled far off in the southeastern sky. The threat of rain hung in the air. But tonight marked the coming of age of the Class of 1924 and nothing could dampen their spirits.

The week had been a full one. Commencement Services held on June 8 at the First Congregational Church included scripture readings (which would be unheard in a public school today), a quartet of voices performing "O, Come to My Heart, Lord Jesus", a sermon entitled "A Good Investment," by the Rev. Ostergren, several hymns and prayers and finally the Postlude (the other end of a Prelude) consisting of an unspecified work by Vincent. The Senior Class Play, A Midsummer Night's Dream, had been performed - to rave reviews - the night before. All that remained was this final step forward.


Viola: I didn't think about it at that moment, but it would be the last time we were all together in one place.

Evelyn: Didn't you allude to that in your speech that night? I seem to remember you saying something about it being "a brief and fleeting moment, held aloft by a fragile gossamer cord..."

Viola: Evelyn, I do believe you are making that up.

Evelyn: No. No, on second thought I am quite sure of it.

Viola: I cannot imagine I said anything of the sort. You perhaps have my speech confused with Lucille's. She was always so dramatic - a regular Agnes Ayres in "The Sheik".

Evelyn: With Rudolph Valentino! "Captured and Carried Away!" Isn't that how the newspaper put it?

Viola: Whatever are you talking about?

Evelyn: You know, "The Sheik...A story of stolen love that has sent a new thrill through the English speaking world."

Viola: Ah, yes. But, I was making the point that Lucille was more apt to dramatics than was I. "Fragile gossamer cord" indeed - surely attributable to her.

Grad: I appreciate getting the fine details correct. Ladies, don't be shy, just jump right in whenever you feel the urge. Now, Viola's story...where shall I start?

Viola: I've always found the beginning the most logical place.


And so I shall. It was October 19, 1906. Theodore Roosevelt announced that he would once again be a candidate for the President of the United States if it appeared that William Randolph Hearst was to win his bid for governor of New York. "If the democrats win in New York, the next democratic candidate for the presidency may be William R. Hearst." This was a prospect Roosevelt regarded as a "calamity." He would therefore yield to popular demand, "cast aside a personal preference for private life," and accept another term as president - for the good of the country, of course.

Alberta Gallatin was appearing at the Winona Opera House in the N.Y. Lyric Theatre success, "Dorothy Vernon of Haddon Hall" complete with the original electrical effects. Tickets were selling for $1.50, although lesser desirable seats could be had for as little as 25 cents.

But most important to my story, Viola was born. Her father's name was Edward; and, although I know her mother's maiden name I have not as yet been able to discover her first name. As was the custom then - and often remains so now - once a woman was married, she had little identity of her own separate from that of her husband. Viola's mother - when she was referred to at all in newspaper articles - was therefore identified only as "Mrs. Edward (blank)." Edward was a very young father, being only 21 years old when Viola was born. She was followed in fairly close succession by a brother, Harold, and a sister, Cleora.

I wonder about Edward's childhood and whether it might have been blighted in some way. If so, did it seep into Viola's young life as well? Despair and unhappiness are all too often legacies passed from one generation to the next.

Edward's father, Herman, was born in Germany in 1851. I do not know when he immigrated to the United States, but by 1886 he was residing in Winona, and Edward had been born. He owned his own tailor shop, although the fact that he and his family lived above a bakery suggests it may not have been an entirely profitable enterprise.

Was darkness always skulking silently around the edges of their lives, waiting like an opportunistic thief? Or was it a bold interloper who sat at the table with them every night and loudly dominated their dinner conversation? I will never know. Whatever its relationship to Herman's family, it made its presence felt on a bright June day in 1907.

On that particular morning, Edward's father had his breakfast, as usual, with his family and went to his tailor shop. At around 10:00 a.m. a customer entered the shop, having made an appointment with the tailor to alter some clothing. Finding the shop empty, he entered the little work room where Herman often did his cutting and sewing. Herman was sitting in a chair and the customer called out to him. When there was no answer, he called out again, and yet again. Advancing closer, the customer realized that Herman was dead; a revolver was lying on the floor at his side. Herman apparently placed the revolver against his right temple, just above the ear, and pulled the trigger. He had taken the precaution of loading all six chambers; only one was needed. Whatever it was that he could not face will never be known. Herman took all the answers with him.

During the investigation that followed, it was revealed that Herman had hinted at suicide the previous week. His sons were so concerned they confiscated their father's pistol. The night before his death Herman walked into the gun shop, just before closing time, and purchased another.

When her paternal grandfather took his life, Viola was almost 8 months old. Her father was 22. One has to believe there were residuals to this tragedy. If and in what way they affected Viola's life is pure speculation. And yet, surely this event would have had a profound effect on her father, and in turn, on her. Perhaps the family never spoke of it. Nevertheless, I am certain she would have known this sad family history. Its burden on her personally, or whether it had any effect on who she became, is impossible to say.

Evelyn: Where are we, Grad?

Grad: We're at the lagoon on the street where I live.

Evelyn: It seems to be a good place to think.

Grad: At this time of day, the sun sits too low in the sky. The light hurts the eyes.

Evelyn: Maybe this is a good place in the story to pause...just for a little while.