The Girl Graduate: And So Adieu 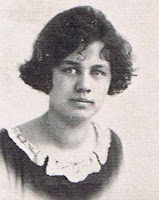 As darkness fell on May 26, 1903, a large and happy crowd gathered at the pleasant little house on Main Street. Lively music drifted out into the cool, spring evening as revelers enjoyed an elaborate wedding supper in honor of John and Estella, just married at St. John's Church. And thus, Evelyn's parents were tendered as a newly wedded couple. They welcomed Evie, their second child, into the world on May 11, 1906.

She was a happy child and a good student. And, although she had a large circle of friends and was actively engaged in outside activities, she was, at heart, a quiet girl. I suspect The Girl Graduate: Her Own Book, was given to her for her 17th birthday, just months before senior year at WHS. In any event, she began her journal in June of 1923, starting with a "Hike To Homer," accompanied by Viola, and Dorthea and someone identified only as "M," during which she collected fern fronds and flower petals, which she later carefully pressed into her little book.
Painstakingly, she chronicled the small and large events of the next year: the wedding announcement of a sister, the marriage of a teacher, the victories and defeats of the basketball and football teams (with numerous photographs of Duffy cut from newspaper accounts of his athletic prowess), the parties, dances, and club events at school. In short, she documented the life of a teenage girl during that most special of years - the year of evolution from child to woman. How impossible it was to read her journal and not be hopeful for her - even fearful for her. And each time I took the book into my hands, I prayed that the promise of youth had been fulfilled in reality. But, unlike Viola, Evie was illusive and ephemeral, and I worried about her.

After crossing the stage to receive her diploma, Evelyn stepped over the threshold of the Winona Opera House into the night, and began her adult life. Although I struggled for several years to find some thread to follow, some clue that would cast me in the right direction, the mystery of what happened to her remained. Whereas Viola actively threw herself into the community following graduation, Evie seemed to have evaporated into memory. The obvious burden I had was to determine whether she had ever married thereby changing her last name. I had limited my search to the 12 years immediately following graduation, the typical marrying years, with no luck. But as I expanded the time line, I was rewarded. On August 17, 1942, the announcement of her marriage to Rex appeared in the Winona Republican-Herald. So, Evelyn had married late in life, and I had her married name.

I wondered about the man who finally wed Evie - where they met, how long they courted, and what he looked like. I assumed she met Rex in her thirties - perhaps at work- and I feared she may have married him only as a recourse from spinsterhood. But, I was wrong. As I was preparing to write about Evie, I took out the 1924 yearbook once again to look at her graduation picture. My eyes wandered down the page, and for the first time I noticed Rex - young, blond, sweet-faced Rex. They had known each other since high school; I wondered what had taken him so long to ask the question. 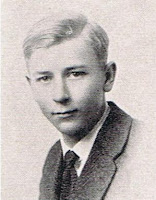 In July of 1942, Rex sold his interest in a successful implement store (which had doubled its volume in sales steadily since it was started in 1938), and he and Evie moved from Winona to Madison, Wisconsin. Soon afterwards, Rex joined the army and the couple was stationed at Fort Benning in Georgia. It was in Georgia that Evelyn gave birth to her only child, James Emil, in December of 1945. She was nearly 40 years old.

There are no other facts of Evie's life that I can share with you, other than that there is a grave site at St. Mary's Cemetery in Winona with the names of three people inscribed: Rex 1908-1981, followed by James 1945-1991, and finally Evelyn 1906-1993. The dates tell some of the story. They explain why there was no one left to treasure The Girl Graduate, and why it found its way into that little antique store, and ultimately into my hands. It speaks of a mother who outlived her only child, the heartache which must have followed, and - if you believe - a joyous reunion at last. At least, that is what is settled in my own mind.
I choose to believe she enjoyed a full and happy life with Rex, that she found fulfillment in a life quietly lived, and that finding her book was not mere chance. I believe it was a gift.
Evie: Optimism, Viola.
Viola: Optimism, Evie, and a touch of faith.
Grad: Faith and optimism are sometimes all we have, dear hearts. And considering the alternative...
Evie: Oh, absolutely! Absolutely! Might as well look on the bright side. Isn't that right, Vi?

Evie: Yes, of course...but, we are not talking about you at this moment, are we dear?

Grad: Come now, don't argue. Oh, I almost forgot about Duffy! Let me them about Duffy.

I must say one last word about Duffy. He went on to receive a degree in Journalism from the University of Wisconsin. He returned to Winona, raised a family of boisterous sons, and wrote a sports column for the Winona Republican-Herald for many years entitled, appropriately, "The Duffer." I never had any doubt about him.
So, that is all there is to the story I promised you. I ask your forgiveness in the clumsiness of its telling. I hope you understand that it if it had not been for a series of seemingly random events, it would never have been told at all. If there is a lesson to be learned, perhaps it was meant for me alone to decipher. And if there is no lesson? Well, that will be all right too.
Evelyn: Well, what do you think she will do now?

Viola: Perhaps she will put it all away, up in the attic.

Evelyn: Or, perhaps not. We lived in some pretty colorful times when we were young, Viola. It was The Jazz Age, afterall.
Viola: I still think she will box it all up and put it in the attic. What more is there to tell?

Grad: I might and I might not. It seems like a small story, I agree. But, maybe each one of us adds our own story to the one already told. And it becomes a larger story and then it becomes our history. Maybe we must tell our own stories while we are able, rather than leave it to chance? Rather than leave it to someone else from another place and another time....Is that the lesson? Evie?...Vi?

But they were gone. Perhaps there was a bridge game or a newcomer who needed to be eased through the first pangs of homesickness.
"They could have at least said good-bye," I thought, a little disappointed. I would have liked the chance to say good-bye - or hello.
Posted by Grad at 4:52 PM