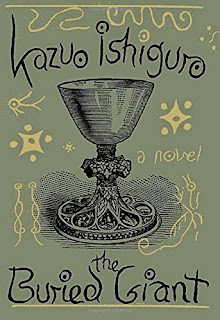 
I would be hard-pressed to rate this book with “stars.”  It is so multi-layered it demands re-reading to get to the core…the sweet nutmeat…the “aha” kernel.  Did I love it?  Did I like it?  My opinion should not matter.  My advice to those of you who are determined to press onward through the labyrinth (and I do recommend as much):  relinquish your preconceptions, open your imagination, and stay buckled in.  The roads are rough, bumpy and will chill a person.  You may get bitten by a memory - which can fester or leave a scar.  Or overcome by the past as it rushes towards you and makes you wobbly, dazed and uncertain.  You may get lost in the mist that clings to every branch and bog.  But if you make it through, you will know what I've been trying to tell you...and further explanation will not be required.
Posted by Grad at 12:14 PM